One of the basic essentials for any bitcoin user is having a bitcoin wallet to secure your bitcoins in. Fortunately, the bitcoin landscape has grown over the past two years to the point where bitcoin users have several bitcoin wallets to choose from to store their bitcoins. But which ones are best?

There may not be a complete “best” bitcoin wallet, but there are some that rise above the rest because of the options they provide their users, their security, and their trust. Earning trust in the bitcoin community is important, and once it’s earned, the more users will flock to that service since reputation is something to stand for.

1) Airbitz – this is a mobile wallet made for both iOS and Android devices. Mobility is important, so wallets that focus on mobile applications are seeing a lot of popularity. Going mobile isn’t it’s only appealing feature though. Airbitz uses client-side encryption, so they don’t have access to your bitcoins. Users have access to their wallet address private seed, in case you need to restore your wallet. In addition to encryption, Airbitz user accounts have username, passwords, and PIN protection. Other features Airbitz offers includes a business bitcoin directory.

2) Blockchain – Having witnessed tremendous growth since they launched their online bitcoin wallet, blockchain.info is extremely useful & simple.They have a robust wallet that is feature rich, including mobile wallets on iOS and Android. The Blockchain Wallet has 2FA login security, and gives users access to their bitcoin private keys, allowing them full control over their money. This is the worlds most popular bitcoin wallet service.with more than 2.76 million users. They even have a dedicated “blockchain merchant” app to facilitate easy merchant accounting. 3) Coinkite – If you’re looking for an easy and safe way to store your bitcoins, Coinkite is a great wallet. One of the features that is important in wallets these days is using multi-sig functionality for increased wallet security. Other features include 2FA login security, and transaction notifications. You can read our coinkite wallet review here.

4) Bitcoin Armory – This is not your average wallet. If you want enhanced security, Armory is a great choice. Armory is a full bitcoin client, meaning it’s not hosted on the web and you have to download the entire blockchain before using the wallet. You can store all of your bitcoins offline, and you can maintain multiple encrypted wallets. It is one of the most secure bitcoin wallet available right now. You can create an offline bitcoin wallet by following this tutorial

5) BitGo – with this wallet, multi-sig is used for increased wallet security. BitGo provides users full access to their private keys for full control. BitGo also has other features for businesses and developers. Multi signature technology is a unique, secure and innovative method to secure your bitcoins. In this type of wallet, there are more than one private keys, and a certain number of keys are required to be signed for a transaction to be executed. This is also known as “m” of “n” signing. 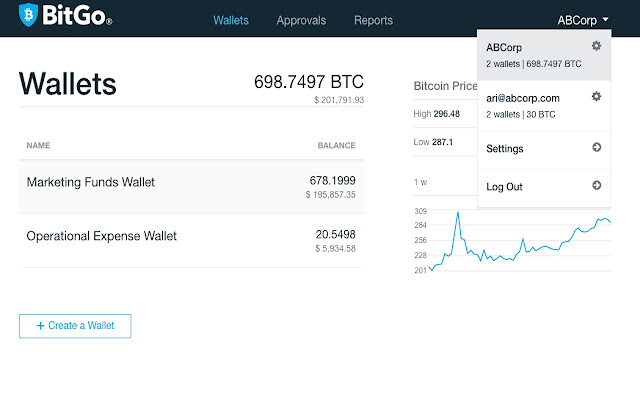 6) Coinbase: Coinbase is yet another bitcoin wallet service which deserves a special mention. They have bagged investments which total up to a massive $106 million and they recently launched their so-called “regulated’ bitcoin exchange. moving on to their wallet service, they have over 2.1 million users. One important feature to note is that Coinbase has a unique “vault” feature which has additional security measures such as delayed withdrawals and multi-signature technology. All this makes the wallet more secure. One issue of concern over coinbase’s wallet is that many users have reported getting hacked through their API keys. This can be solved by disabling API access to your account. Moreover, coinbase has some nifty merchant services and some ready-made plugins for wordpress, magento, etc. YOu can even create your own custom merchant solution through their API.

Overall, these are just a few wallets which stand out from the rest, but you should choose your wallets depending on your needs such as liquidity of funds, safety, etc. Security of your bitcoin wallet should be of much higher priority and BBW(our new nickname) will be coming up with a post regarding a checklist on safety.